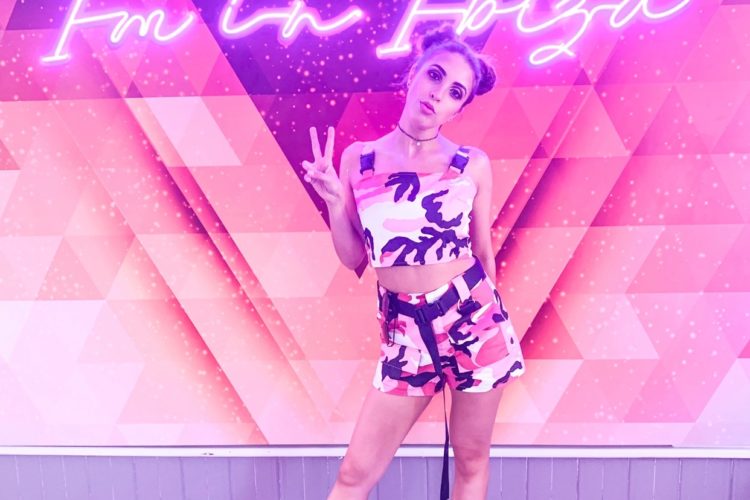 Hey guys, as you’ll have seen on my Instagram, I recently visited Ibiza with my boyfriend for 4 nights over the bank holiday! Let me tell you a little more about what we got up to:

Travel day!! We woke at 2.35am and headed to the airport. Believe it or not there were people drinking cocktails and beers that early! It was a burger king for me then the rowdiest flight ever to Ibiza!

It was only a 2 and a half hour flight which wasn’t too bad and then we headed to the hotel. We stayed at the Playasol marco polo II in San Antonio.

As it had been an early morning we headed to the beach for a few hours and had a relaxed sun set dinner at café del mar.

We reserved a table with a minimum spend of €65 per head which is pretty steep. It’s not hard to spend though as the drinks and food were quite pricey given the stunning location.

Unfortunately the table was blocked by hundreds of tourists but we did stand and see the gorgeous sunset. The colours were lovely and by that time there was a really nice bustling atmosphere.

We also had a few drinks in the west end which was super cheap-though we were nice and sensible and headed back at midnight after a long day.

Since our hotel was a 5 minute walk to Lidl we got some supplies snacks and bottles of water and some things for breakfast to eat in the room. I of course had to get some Spanish ham which I absolutely love!

We had a few hours in the hotel pool and then we headed to Ocean beach club! I was really excited as literally everyone seems to go there on a trip to Ibiza.

The atmosphere was so lively and fun and everyone was having a great time. I definitely recommend going here if you want to go to a pool party. They also do amazing food! I recommend the sushi and the mini cheeseburgers.

I wore a really cute red swimsuit from I Saw It First. I love this style as it’s a multiway so you can create cool shapes and fancy backs.

We stayed until closing time (what a rebel) and then had a drink at a nearby bar before heading to bed.

On day three we got tickets to Ants which is a party at Ushuaia hotel. It was really fun though I’d only go if you’re into trance/house music as it was quite a similar beat throughout the evening. The drinks were very expensive at €20 a drink so make sure you bring enough cash. Everyone has a dance and the vibes are really chilled.

We left after a few hours and headed back to get ready for a meal at STK restaurant. Our table was quite late at 11pm (not at all shocking for Spain), but the food was lovely. It was a shame we filled very quickly and could barely touch the side orders but I definitely made sure I finished my steak! It’s a pricey restaurant but well worth it and there’s entertainment too so it’s a full fun filled night!

We wanted to see a bit more culture than just parties so we got the bus over to Ibiza old town. I recommend the bus as opposed to taxis as it’s a fraction of the price, the bus station was 5 mins from the hotel and the ride is nice with all the scenery.

We had lunch on the marina and I of course had some seafood paella. The portion was huge for 1 person but I gave it a good go!

We then walked up to the castle where the views were just breath taking! take a look at my vlog to see some more! I 100% recommend visiting here if you have the time!

Later that evening we went to Zoo project at Benimussa Park and I wore my cute little camo print coord.

It was a cool vibe but it definitely got better as the night progresses. There were fairly cheap drinks, there was fresh pizza to buy (which I of course took advantage of) and 3 different areas with different music styles.

There’s also really cool body painting too! It was a fun party and it was nice to see spaniards there too and not just Brits-i got a chance to practice my Spanish! YAY!

Even later in the evening we headed to Amnesia since our hotel gave us free tickets with a free drink (rude not to!). It was the fiesta espuma (foam party). I’d never been to a super club or a foam party so I was really excited! It wasn’t as big as I expected inside but the music was insane! We had such a good time, though the foam didn’t start until 5 and we were flying back the next day so we missed it as we left around 3.30. Again, brace yourself for pricey drinks at 18 euros spirit and mixers and 7 euros for one shot. On the plus side, spaniards don’t measure their drinks like we do they just pour and mentally measure it. I would definitely recommend coming here as the music was amazing, there’s dancers, there’s another room with a different type of music, and the bar staff were lovely. If you’re going to do shots then try “hierbas” which is very similar to samba.

We had to check out of our room at 11am so we were glad we left the club early the night before.

We checked out and had some time at the pool before having a walk up to wiki woo.

We had a spot of brunch and a dip in the pool there. It was quite a long walk from our hotel- but the view was lovely and the hotel was so cute and girly (and very grammable!).

After a few hours we headed back for the bags and took the bus back to the airport. The flight was a lot quieter on the way back thankfully and we made it through security pretty quickly which was fab.

I had a great weekend and definitely glad I went. Take a look at my Vlog to see some more.

Equally, if you have any questions about my time there then get in touch on here, email or my instagram.

See you next time