Like many others, I admit to having a slight obsession with all things Hogwarts, and having a Harry Potter marathon is a regular feature in my life!

I went to the Harry Potter studios in Watford which was amazing, although I found the giftshop really expensive (though that is to be expected-c’mon these people aren’t stupid).

Of course I had to treat myself to a chocolate frog (which was basically a plain cheap chocolate shaped like a frog, but it did come with the character card which was pretty cool.

I also bought a Hufflepuff badge as that’s my house . I also got a Hufflepuff lanyard which I wear with pride, and a deathly hallows necklace which looks so good! (if i do say so myself!) 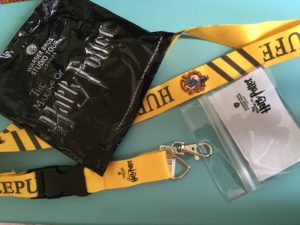 I definitely recommend going to the studios if you are a HP geek like me.

We stayed over at the Hilton Hotel which was  a little outdated, but only a short drive away from the studios and it was next to a Toby Carvery which would go down a treat if you are with your family.

The other day I was wondering round Primark for some essentials, and guess what I spotted? A tonne of harry potter pyjamas-I literally wanted to buy everything in the section. Just when I was thinking it couldn’t get any better, it did! I also saw Harry Potter satchels, purses, cosmetic bags and other accessories like jewellery and keyrings. I had to refrain from spending a lot of money, although I did treat myself to these 🙈 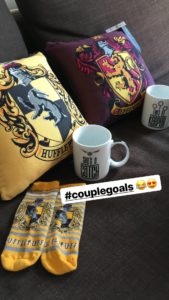 What I found particularly cool was the fact they had bed throws and cushions (although the majority of stuff was Gryffindor and Slytherin, and the Ravenclaw and Hufflepuff was slightly forgotten).

I treated myself to some PJ’s and the most amazing his and hers mugs for £8 which say “He’s a keeper” and “She’s a catch”, how cute! #purecheese #couplegoals.

The cushions you can see in the picture were only £4 each and the trainer socks were cheap too.

That’s the thing I love about primark-it caters for everyone.

Another great place to visit if you like HP is the Shambles in York. It looks and feels like you’re walking down Diagon Alley and there are a few magical shops there too! Go and take a look it’s amazing. (I also have a few snaps on my instagram if you want to take a look).

Do you guys know any other cool HP themed places or know anywhere else you can buy themed merchandise? I’d love to hear from you as always.