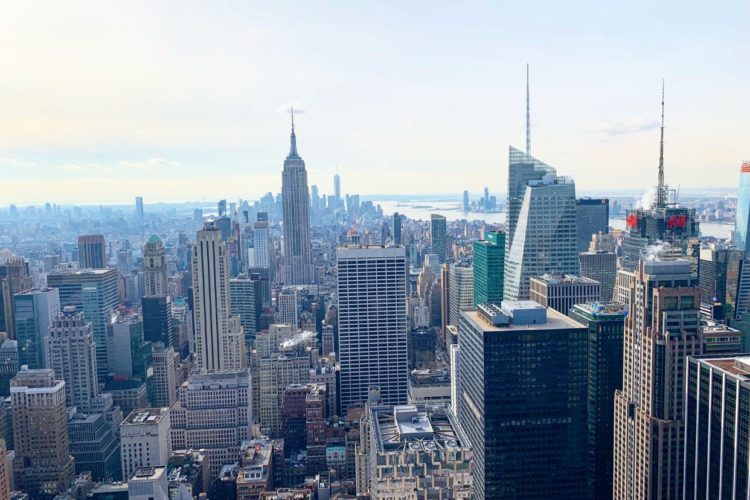 Hello all my lovelies, and welcome back to Tattiexo. As you will all have seen, I recently visited New York and was lucky enough to spend my New Years there. Despite only being able to go for 3 days, it was incredible, and I saw so much. I did make a vlog of the trip, and have been posting regularly on my Instagram account, but I also wanted to give a bit more detail and write a blog post about it.

You can check out my Vlog here:

One of the first things I remember was just how busy it was. I know that New York is ALWAYS busy, but with it being New Year, so many tourists came. (And now I know why!) All the people, along with the stunning lights and Christmas decorations (the Americans sure know how to deck their Halls!) gave such a great bustling atmosphere

A unique way to see the city:

As you may have seen on social, Mark had booked the BEST SURPRISE EVER for me the first day! We got a cab from Manhattan to New Jersey which seemed to take forever, then as soon as I walked through the reception I knew, as I instantly saw a giant helicopter. Although the helicopter we’d be going on didn’t have doors and our legs could hang out in the air! I’d always wanted to go in a helicopter and was just so excited. I was even happier when I was picked to fly co-pilot and had the best views imaginable.

Unfortunately, a piece was missing from my go pro chest mount but I still got some pretty amazing footage. (take a look at my vlog if you haven’t already seen!).

I 100% recommend seeing NY from the air. You can honestly see sooooo much and from a completely different perspective. It’s 30 minutes of pure awe! Our pilot was amazing too because he took us everywhere we wanted to see and slowed down for us to get a shoe selfie ahhha!

You can book a helicopter with the wonderful people over at FLYNYON here:

You cannot visit NY without visiting the 9/11 memorial. (my birthday is actually the same day as the 9-11). It was just ginormous, it was like a water feature, and engraved in it was each of the victim’s names. It was so beautiful and really makes you think about how grateful you should be. We had a visit at the top of the world trade centre and although we were told it would be foggy, which it was, the views were still breathtaking. We aimed to get there for sunset, but because of such bad weather and fog, it skipped sunset and went instantly dark. NY at night and from such a height was just fab. You can walk round and take your time which is good and you get a full 360 view of the city.

I tried to look at Westfield at World Trade Centre but because it was NYE, the shops shut early. That didn’t stop me shopping though because the next day I found Macy’s, and Saks 5thAve, and Sephora (of course!!-I treated myself to a detox brush Shampoo), and Tiffanys!! (No engagement ring though since the one I liked turned out to be an extremely rare blue diamond worth 6 million dollars!- trust me to have such expensive taste!).

I thought Macy’s and Saks were incredible, but Macys was much more affordable and it was just massive. I had to dash around because there was so much more to see. I honestly could have spent all day in there.

One thing I didn’t like about the USA though is that the tax out there is added on afterward and so trying to track what you’re spending is near impossible-and everything is expensive. We did also get taxed on check out of our hotel (despite having already having paid). It added up to around £140 and is something to do with state taxes. We weren’t aware of this when we arrived so it’s a good job we had enough left.

OK so the views at top of the rock were THE best city views I’d seen. It was just amazing. We saw it in the daylight and you can literally see everything. I also love that at Rockerfeller Plaza there’s the iconic humongous Christmas Tree from Home Alone and the cutest Ice Skating Rink (which is open until April). It cost around 90 dollars for 2 people to have a 2 hour skating session (including the hiring of your skates)

You know when people are in NY because they HAVE to get a snap in times square. We tried to go on new years eve for the ball drop, but honestly I’d never seen rain like it and didn’t want to spend all night trapped in a crowd getting soaked through. They close the streets and you aren’t allowed brollies. Instead we had a lovely evening in a bar near our hotel and counting down the seconds to 2019 with the locals. It was so much fun and a lot dryer and warmer than the ball drop (which we watched on TV).

Times square is just as incredible in the daytime as the night time, but getting a shot without many people is impossible. You just have to find a spot and get your insta boyfriend to press the shutter down so you have variety to sift though.

You can never be short of cabs in NY, but you don’t know roughly the amount it costs if you’re tourists. We often got Ubers (there’ll be a slight exchange charge from your bank), and we also got the subway a few times. It cost €3 for a single trip and €10 for something called a day tripper which we thought was a day ticket but it wasn’t and it was actually cheaper to get single tickets as the day trip ticket only let us get 3 journeys before running out.

The Subway was really clean and fast, but we spent a lot of time walking though. I really shouldn’t have worn heeled boots one day as my feet were sooooo badly hurting (but worth it for the gram shot). I also highly recommend breaking in timberlands if you bring them.

I definitely recommend going practical over style as it just isn’t worth it in winter and with the amount of walking and exploring you do, you want to be warm, comfortable and dry. I brought lots of layers like scarves, hats, cardigans and scarves under trousers for extra warmth-it helped so much!.

We sought out a typical American diner for breakfast new year’s day. I had scrambled eggs, Canadian bacon and pancakes with syrup. It was yummy and the pancakes were so nice and fluffy. A lot of tourists go to a Stardust Diner where the waiters and waitresses sing for you.

We also stopped by for a root beer and freak shake at planet Hollywood. It was a good job we ‘d already eaten somewhere else because the queue for anything in times square is huge. Such as planet Hollywood and the Hard Rock Café.

I also had to try a vendor hot dog. It was just a shitty cheap hotdog but it’s a classic. These carts are literally everywhere on every street. I do NOT recommend the giant pretzels. It was burnt and taste horrendous and cost 5 dollars which is a rip off. Instead go get some snacks from a 7-11-they have hotdogs and pizza slices if you’re really hungry. Also the McDonalds drinks are like a litre size unlike here so it’s awesome!

We had to take a visit to the natural history museum where the entrance had 2 xmas trees sculpted into dinosaurs-it was adorable. Inside was ginormous and there’s no set entry fee. There’s a recommended €22 for adults but you just pay what you think/can afford. It’s more like donations I suppose. In the entrance were some unmissable dinosaur skeletons with many more floors full of wonderful exhibits.

To get to the Museum we walked partially through central park which is honestly just massive. Inside there are some pubs/bars and we stopped off for a cheeky drink. There were no leaves on the trees and it was nippy, but the fresh air and the beauty of the park was amazing. Seeing the skyscrapers through the leaves is lovely. You can also get a horse and carriage ride if your legs are tired.

We visited Wall street and china town (and they mean china town as the restaurant we went to barely spoke English despite having an English menu……the food was lovely though.)

Before china town though we went to try and get to Brooklyn Bridge. We unfortunately couldn’t get on the bridge as the queue would’ve taken around 4 hours (not exaggerating). We didn’t want to waste any time and so managed to go round and get some shots of the bridge which were just as amazing with the bridge in the background. We managed to find a place called skyline where there were incredible views, a little ice rink with a view of the city in the background, and a lovely bar. It was so nice and quiet and definitely more a place that the locals would know.

The 3 days just flew by and it was honestly just such a magical place. It would be amazing in summer but having seen it over the festive period, I wouldn’t change it. It was breath-taking and I would return in a heartbeat as there is definitely a lot more that I want to see.

-don’t try to cram too much in-you will get around so much but trying to fit too much in will tire you out. Also it’s a little tricky to adjust to a time difference which is behind the UK, so make sure to stay refreshed and hydrated

Hope this blog post was insightful and has made you want to consider visiting New York over Christmas or New Year-it’s fabulous.